I reblogged this a few days ago and am just following up with all of y’all. How is it going? What has God shown you in the last few days?

Do not strive in your own strength; cast yourself at the feet of the Lord Jesus, and wait upon Him in the sure confidence that He is with you, and works in you. Strive in prayer; let faith fill your heart-so will you be strong in the Lord, and in the power of His might.

“And he brought him forth abroad, and said, Look now toward heaven, and tell the stars, if thou be able to number them: and he said unto him, So shall thy seed be.” Ge. 15:5 KJV

In case you are just stepping into this series, we are meditating our way through the biblical verses about Heaven. I believe meditation should be an act that fills our minds with possibilities. When I meditate on a subject I should come away inspired and changed. I should be incited to some action by the thought I have had. We have all heard the statement “so heavenly minded they are of no earthly good.” Any meditation on Heaven should prove that statement a lie. Thinking about Heaven should motivate us to become more productive and useful in the here and now.

Yesterday I asked you a question: “What has your view of Heaven inspired you to do here on Earth? “

So tell me what do you think happens if you don’t fulfill your purpose? Is that even possible?

“Melchizedek blessed Abram with this blessing: ‘Blessed be Abram by God Most High, Creator of heaven and earth’.” Ge. 14:19 NLT

We don’t know a whole lot about what the realm of Heaven looks like. Our own fallen Earth is breathtaking even in its broken state.

God has created such grandeur here as human artists can only emulate.

Here,  He shows himself to be a God of intricate detail. He cares about the smallest petal and the sweetest scent.

He shows his creativity in the beautiful fury of the storm-clouds. Mixing our hearts with wonder and fear as the lightning crashes.

He reveals himself in the snow.

in the warmth of a campfire. God made all of these things for us to enjoy here on Earth.

We may not know much about what Heaven looks like. We may have only fleeting glimpses and descriptions of the New Earth and the New Jerusalem that lie ahead for us; But we know the work of the Architect who has made them or shall make them all. We have seen His work with our eyes. I can only imagine the wonder…. But perhaps one glimpse of Jesus will make all the beauty of Heaven pale in comparison….Maybe I don’t long to go to Heaven at all. Maybe what I really want is to see the one who died and rose for me. 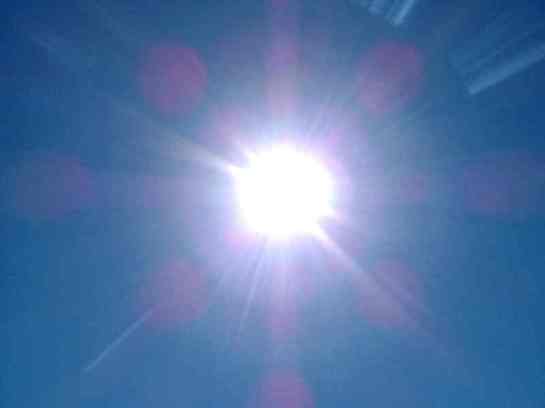 “I have brought you glory on earth by completing the work you gave me to do.” John 17:4 NIV

Religion is man’s attempt to get to God…his futile attempt. How many foolish things have we done as a race to try to win our way back into the presence of the Divine?  There was the failed attempt at Babel, the worship of various idols down through the centuries, the sex cults of Ashtoreth,  and Aphrodite and even the horrific practice of child sacrifice, called Molech . But religion could never do what only Christ had the power to accomplish. All of it only pushed us farther and farther away from God and caused us to bring Him less and less glory. Even the righteous pursuit of religion practiced, under God’s direction,
by the Hebrews failed to bring men closer to God. The writer to the Hebrews wrote
that the laws and sacrifices of ancient Israel were only a shadow of the things to come. He went  on to state “it is impossible for the blood of bulls and goats to take away sins.”  Hebrews 10:4 NIV
Without the removal of sin there is no restoration of our relationship with God.  And there is nothing man can do to remove his own sin. So it is that Jesus in the fullness of time came into the history of mankind and completed the work God the Father gave him to do. Jesus’ death on the cross and resurrection from the dead has brought glory to God. God receives glory every time a sinner is forgiven of his sins and is brought back into
relationship with God through the blood of Jesus. God receives glory every time a Christian chooses  righteousness over wickedness by the power of the cross. Jesus’ work was completed on the cross. He is still completing His work as His cross is applied to our lives when we cry out for it through prayer!

Tell me about when Jesus brought glory to God by rescuing your life!

Joel: What a great book!Nobody really knows when it was written. So we will put it here in our study.

I am changing as I write. I find I need to take a break sometimes from the work of writing this series (hence the little side blogs which pop up now and again). My heart has to process all the Word is saying to me. The study has sparked some great conversations I might blog on later. Let’s just say by the end of this study I will not be the same man I was at the beginning. After all isn’t that the point of “Reinventing the We’ll”? We reinvent by making new decisions and choices for our lives!

That brings me to my topic for the day, decision! In Joel Chapter four the prophet writes, “Multitudes, multitudes in the valley of decision.” Joel 4:13 NIV

Now my life coach has a favorite line he is oft prone to quote. “You can do anything but you can’t do everything.”

It is so true. Life requires decisions and each decision limits us.

God and I were talking the other day and He spoke into the silences of my heart, “Son prayer is the most important part of your day for in it you are led to decide the things I would have you do. There is much in the world to be done. But I don’t want you to do it all. I am infinite but you are finite. So you must find out from me where I would have you invest your finite resources. It will be this way for all eternity.”

Now that last bit of the word hit me hard. Maybe it caught you off guard too. I guess I never thought about still being limited in Heaven before, but it makes sense. We are not God now and we won’t be then. For those of you who might have been thinking when you get to Heaven you will be all-knowing or all-powerful I am about to burst your bubble of unbiblical belief. The word never says omniscience or omnipotence become the state of men. Those things are reserved, it seems, for God.

Now though we have to make a choice continually against that unsanctified part of us which says “You don’t have to pray about this. Do what you feel is right.”

Listening to that voice never ends well for me. It’s not ending well for many of our fellow-men either. For so many the Valley of Decision is a place where men choose not to follow God. Instead they listen to the voice of the flesh which tells them they are more than qualified to captain their own souls.

Even some of us who at one time bent our knees before the Cross of Christ are returning to the Valley and making a decision to live life out of our own desires rather than those of Jesus. I don’t know what that choice says about  salvation. But I do know what it says about the place brothers and sister who choose this way will stand in a coming judgment. Such folks are out from under protection. They are in the line of fire!

There’s a subtle lie we have come to believe though: “We can do everything!”.

Somehow we have come to believe we can live for Jesus and live in sin. This is a perfect example of “You can do anything but you can’t do everything.” If we have chosen to live for Jesus that decision excludes sin. A life for Jesus means I have committed to continually working to shut out sin. I may not always be successful. I may have trouble. But I will always work at it. My decision to be a Christian limits me to an ever-increasing holiness. I cannot just go on sinning wantonly. This is where so many are stuck in the Valley of Decision. That valley is a place open to the judgment of God.

We have to come to the decision and move past it out of the Valley into God’s protective holiness. That is where I am journeying to! How about you?

Remember Indecision is a decision!