“You must not make for yourself an idol of any kind or an image of anything in the heavens or on the earth or in the sea. You must not bow down to them or worship them, for I, the LORD your God, am a jealous God who will not tolerate your affection for any other gods. ” Ex. 20:4,5 NLT
We humans are always wanting to SEE something of the God we serve. It’s the old “prove to me God exists and I will believe in him routine.”
I have to confess not having grown up in a culture where blocks of wood, stone and gold are actually worshipped I don’t get the whole idol thing.  But the thought that maybe our western agnosticism might stem from the fact we no longer have anything to look at to help us worship is sort of provocative.
At least in the places where idols are worshipped there is a general acknowledgment that a spirit world exists. Does that mean we’ve made an idol out of not having idols? If so that is totally whacked!
In verse four of Exodus 20 I believe the use of the word “heaven” does not refer to the eternal Heaven where God resides. After all,  none of us have ever seen the beings who reside there. How in the world could we possibly make images that mimic that place? “Heaven” here probably refers to the atmosphere.  God is saying “Folks don’t  make a statue of a pigeon and worship 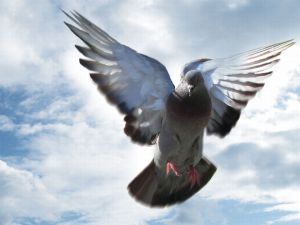 it! I am not a pigeon.” Scripture attests though that this is exactly what people did.
Yes, they knew God, but they wouldn’t worship him as God or even give him thanks. And they began to think up foolish ideas of what God was like. As a result, their minds became dark and confused. Claiming to be wise, they instead became utter fools. And instead of worshiping the glorious, ever-living God, they worshiped idols made to look like mere people and BIRDS and animals and reptiles.” Rom. 1:21-23 NLT
While perhaps none of you are going out to make a wooden pigeon to bow down to tonight, I do want to ask how much of your faith is built upon sight rather than trust? How many hoops do you require Him to jump through before you obey the God we cannot see?
Let’s Pray: Father God I know you have called me to walk by faith and not by sight. Lord help me because I know sometimes I do just the opposite. Save me where I have made a god out of scientific evidences and  physical proof come and help me walk in biblical faith. In Jesus Name Amen!