A hundred years ago Morton Converse ran a toy factory in our town that supplied most of the country with wooden rocking horses. The toy business  gave Winchendon its nickname, “Toy Town”,

and made Converse a wealthy man.

He built a mansion in the center of town on a steep hill that overlooked the Miller’s River. His home and garden terraces ran all the way to the river’s edge and spread across to several islands on the waterway. 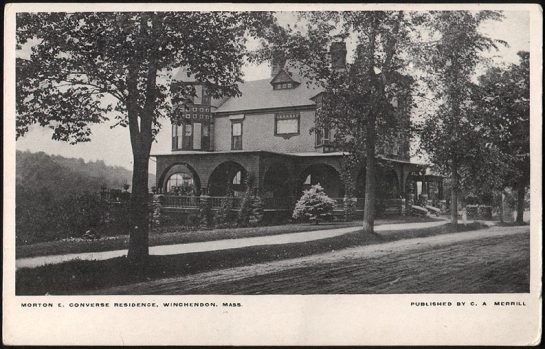 The factory burned down when I was a kid. All that is left of the mansion is a few stray concrete walls

which have withstood the encroaching forest and the tides of the River.

A few well-meaning souls have tried to push back the undergrowth and plant a garden along the edge of the road where part of the foundation still remains.  I cannot say they have met with success. But where men have failed to tame the hillside beavers have commanded the water’s edge to bow to their will.

I have known about the beavers for a few years and have wanted to spend some time watching them. But the opportunity never presented itself , that is until my daughter Melanie’s last  visit home. She suggested that we should take some time and visit the Converse beavers. So last Thursday we did just that.

The rain let up for a few hours in the morning. So we put on long pants to guard against the tics and the cold and set out.  We hopped the fence

and headed down through the foundation garden. The grass had grown in along the side walls all but obscuring the foundation stones as we set out down the steep hill. We quickly lost the rock pathway  in the foot deep grass. Grasping onto limbs to guide us down the steep hill Melanie and I quickly realized we were not dressed for the task. The hill was  nothing but mud and grass, wet with three day’s rain.

By the time we reached the chapel wall we had slipped several times and our jeans were soaked up to the knees.  But we had a good view of the little critters who maintained the river. We watched for quite a while despite our chilly discomfort, mostly because we dreaded the thought of climbing  back up the way we had come. That’s about when we realized we were actually standing on a muddy trail that seemed to lead further up towards town. We decided we had little to lose; So when we were finished watching the beavers build a new island we took the pathway to its end which by golly was a set of stairs that led directly to the street.

Apparently someone a hundred years ago had been bright enough to figure out that people would want to go down to the river and that perhaps there should be a better method of getting there than to repel from the back-end of the mansion.

Of course I, being a modern guy and all, never thought once to look for a set of stairs. Oh no… if it had been my mansion I would have strung a rope from the bathroom window and said to my guests “don’t forget to flush before you climb down to the gardens!”

Makes me wonder how many other things in life I am doing the hard way.  I hope one day I will learn the lesson” work smarter not harder.”

What lesson is life teaching you these days?